As featured in My Mercer Island, September 27, 2020, by Naomi Tomky 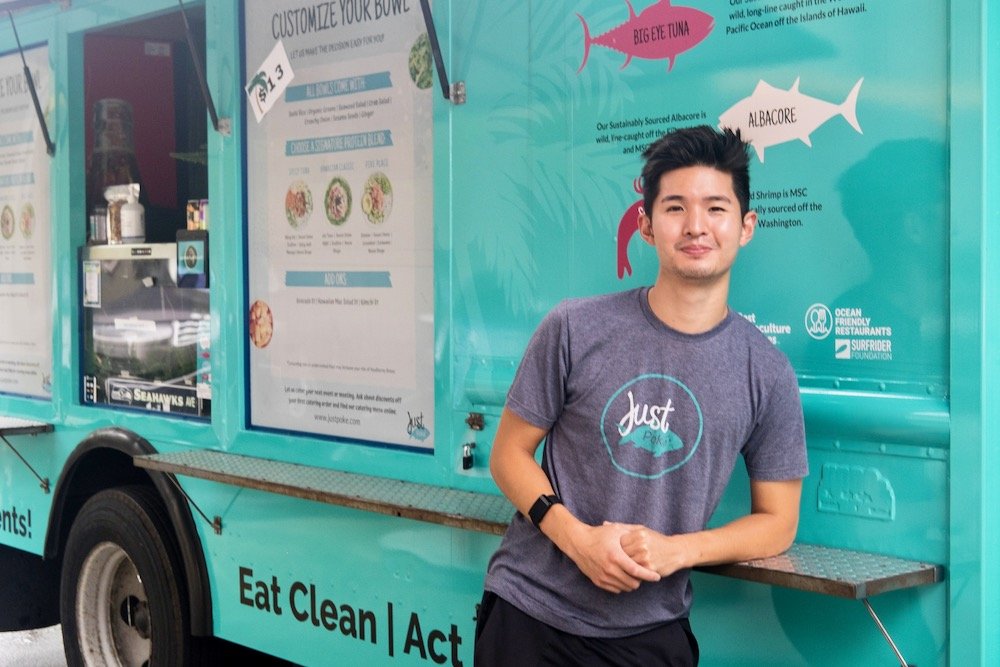 Danny Brawer and Norman Wu met in the fourth grade at Lakeridge elementary on Mercer Island and stayed fast friends through their youth and young adulthood. Various entrepreneurial ventures kept them connected throughout the years and between cities – Seattle and Los Angeles. Their most recent business is a fast-casual restaurant called Just Poké, which brings them back to the island with a delicious new addition to the local restaurant scene.

Norman describes Just Poké like the combination of a sushi restaurant with a build-your-own bowl chain, similar to Chipotle. Diners choose a base of rice or vegetables, up to three proteins like ahi tuna, seared scallops, or tofu, and any sauces, mix-ins, or toppings they want. You can also choose a Signature Bowl where the ingredients are already chosen for you. The “Spicy Tuna,” for example, includes spicy ahi, cucumber, sweet onion, scallion, house shoyu, spicy aioli, masago, and ginger.

It took Wu and Brawer almost a dozen locations throughout the Seattle area to finally bring Just Poké to the island where they grew up. “We have big networks here,” Norman says, explaining their excitement. They see the people they played basketball with at the JCC and friends from childhood coming to their business. “It’s been really fun.”

Next to the Just Poké turquoise truck, under the awning of Hap’s Burgers and Taps, Norman explains how they found their way back. After graduating with a degree in finance from UW, Norman moved to Los Angeles and started working in consulting, where Danny, his best friend from elementary school did the same thing. Eventually, the pair joined forces and started their own headhunting company. But once they sold that, they had a little money to spend and wanted to find their next opportunity.

At the same time, their families were back in Seattle and they missed the seasons. They’d seen the trend of poké – Hawaiian-style raw fish salads – explode “on every corner” in Los Angeles and decided it was time to bring that to Seattle, using the kind of high-quality fish they knew Northwesterners would demand. 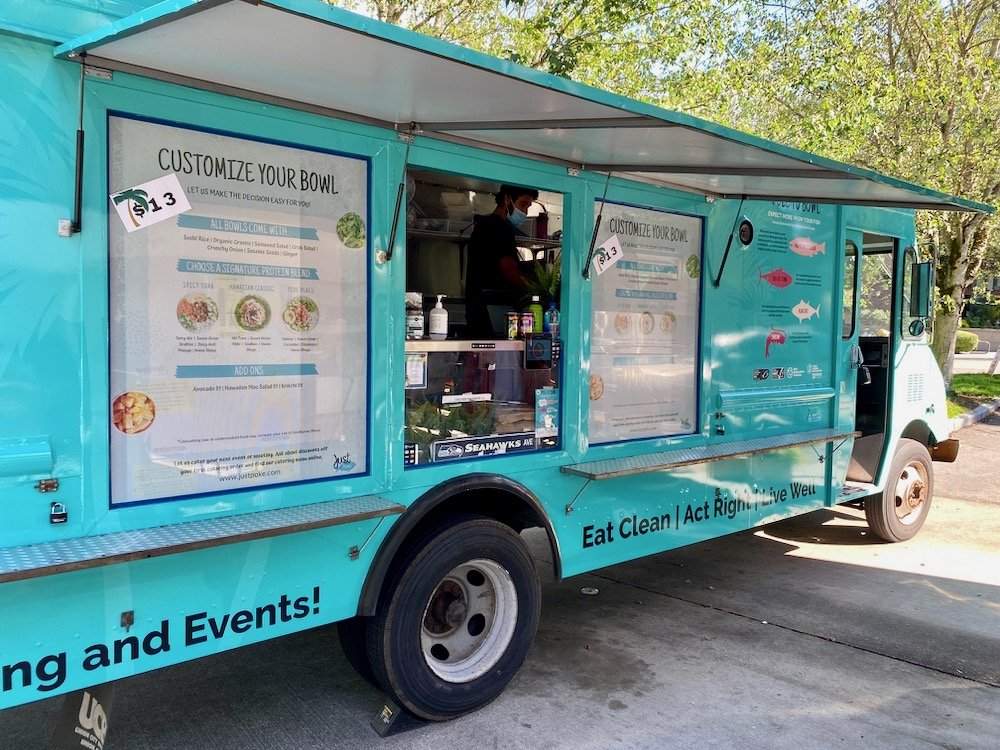 In 2016, they opened their first store in downtown Kirkland, followed by Bellevue. After getting to five locations in 2018, they started opening franchises and expanding rapidly. They plan to have 17 or 18 locations by the end of this year, using the scale to keep prices down and in line with their commitment to quality.

“But we’re from Mercer Island, we live here,” says Norman. They hoped to find a viable location for a bricks and mortar shop on the island, but couldn’t find a deal on rent where the money penciled out. A potential deal with New Seasons fell through when the stores were purchased by Metropolitan Market, which operates its own poké bars.

Suddenly the truck they had planned to bring to events around the region – the Bite of Seattle, Issaquah Salmon Days, farmers markets – was rendered idle. Meanwhile, their friends and fellow Mercer Islander restaurateurs from Homegrown offered them the space to park their truck outside Hap’s. “Mercer Islanders are supportive,” says Norman. “So we decided to go for it.”

So far business has been good, even working well with Hap’s since it allows one family to get food from two very different businesses and still eat together in the same place. They plan to keep the truck parked there as long as it’s busy enough to operate, including through the winter if feasible. If not, though, they’ll winterize the truck and plan to re-open in the spring and summer. 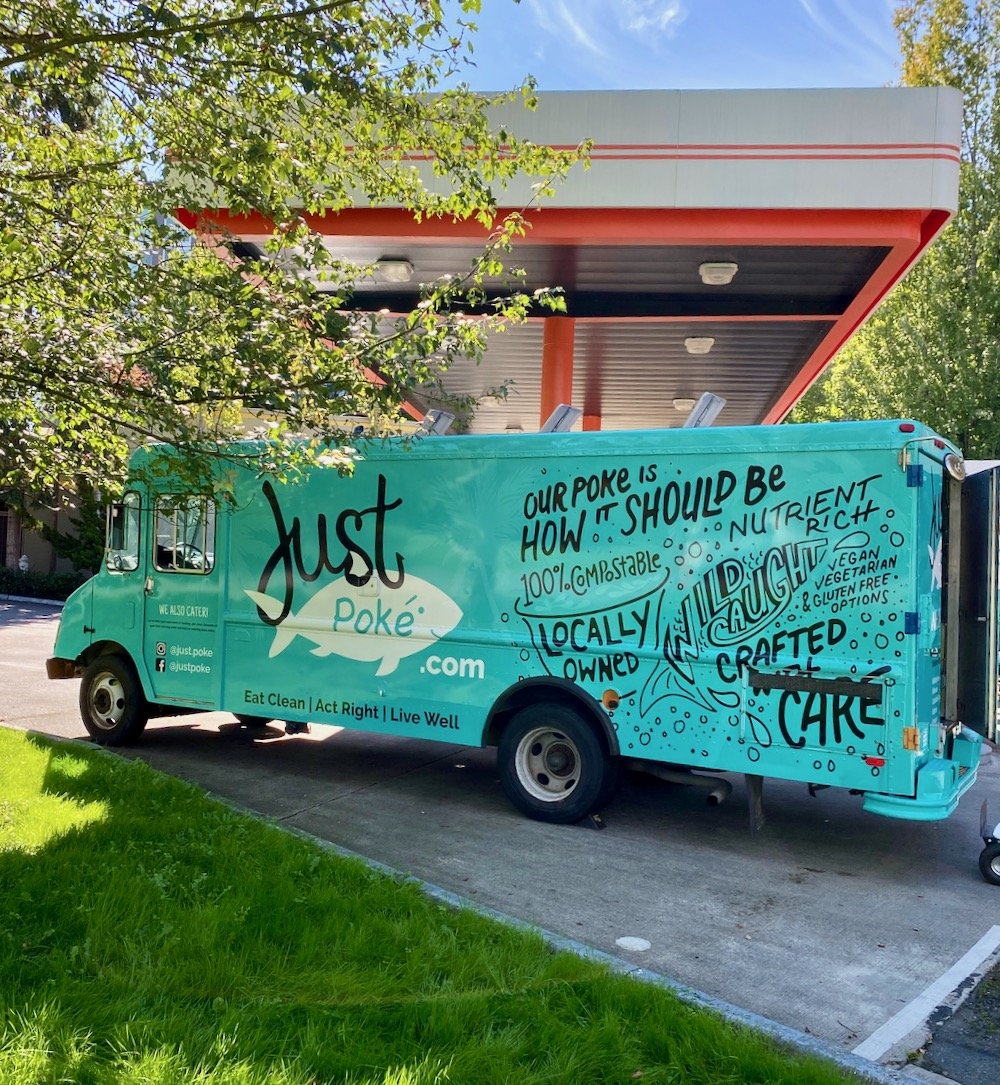